The Haus first formed in October 2015 as a group of fans of the TV show Rupaul’s Drag Race. The group would regularly talk and review the show and its drag queens as well as make trips to local drag bars and clubs to study up on the craft.

Whilst the group was forming, Matt “Stalls” Stallworthy (one of the founding members of the Haus of Dench) was developing a format for a cabaret/club night called “Stalls’ Lip-Sync Lollapalooza” at the University of York campus. This night moved to Fibbers nightclub in York city centre and the first few queens and kings in the haus were born. 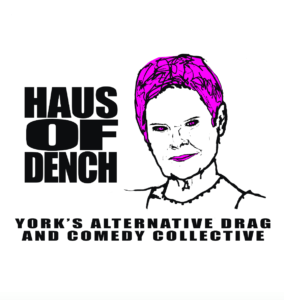 The name “Haus of Dench” was first used publicly in October 2016 with the haus officially establishing itself in January 2017. Since then the Haus has grown in popularity and fandom, with its flagship night Lip Sync Lollapalooza growing to become the most popular alternative night in York’s clubbing calendar, and the “Denchers” (as they refer to themselves) appearing at a variety of pride and music festivals along with appearances at the Edinburgh Fringe festival.

2018 was a very busy year. Starting with a nationwide scanda with Big Brother contestants India Whilloby and Courtney Act, our queens were constantly busy with performances up and down the country including performing with Season 9 winner of RuPaul’s Drag Race Sasha Velour. The Haus enjoyed sell-out shows in their home city, our first wedding gig, a hit Edinburgh Fringe run and a killer New Year’s Eve party to top it all off.

2019 has seen another big year for the Haus, producing a range of new shows such as QueerKeller and *tongue pop* along with lots of gigs at various exciting locations from hen parties in hidden bars, to sex-positive cabaret nights, to cinema screenings of Vine compilations! Most recently the Haus has debuted it’s first theatrical venture with Drag Queens vs. Zombies, and a couple of our drags keep themselves busy with various online projects too.

We’re already planning our shows for 2020 so keep an eye out on our social media for more info as our plans come to a head!