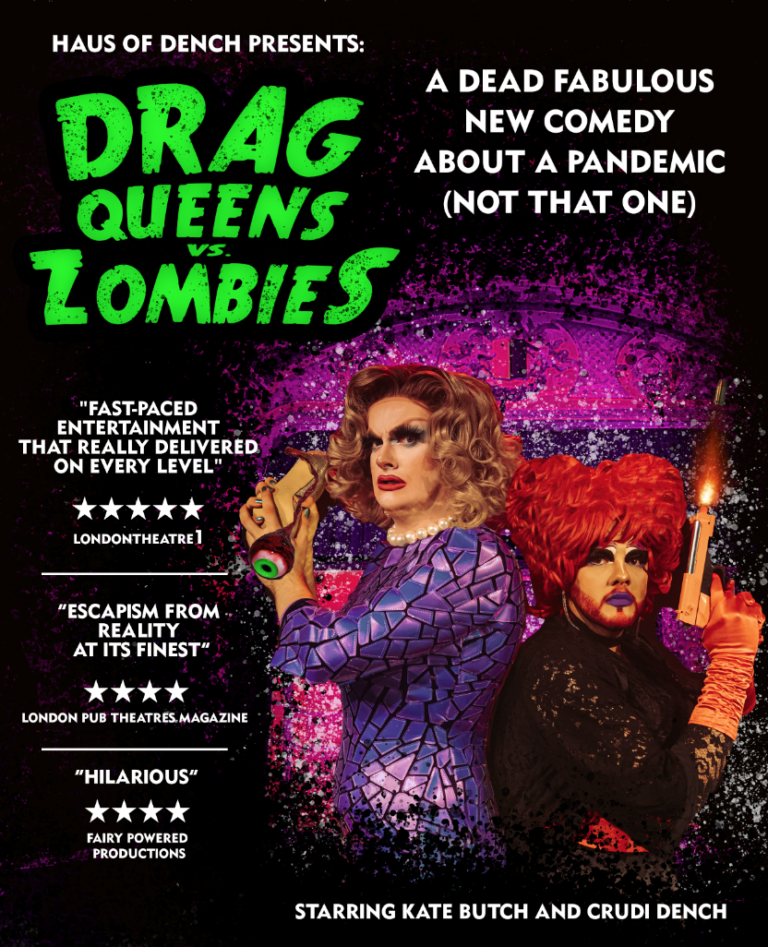 The latest production from the Haus of Dench is a 5-star laugh-out-loud comedy horror where the fate of the audience is in the fabulously manicured hands of two hapless drag queens!

A blood-borne bacteria is spreading across the country, reanimating the dead into disgusting zombies hell bent on eating the brains of the living. As the zombies invade the theatre, the queens must overcome their differences and use their unique talents to find their way out of the oncoming apocalypse and save the audience from a gruesome death!

Written by award-winning writers Matthew Stallworthy and Eleanor Mason (who was recently shortlisted for the Funny Women Comedy Writing Award) this is the Haus of Dench’s first foray into a full theatrical play, having had great success with their award-nominated cult cabaret/club night Lip Sync Lollapalooza Crudi Dench is played by Stallworthy, who is currently touring the UK with the 5 star sci-fi improvised adventure Any Suggestions, Doctor?. The show also stars Kate Butch, known for their own award-winning solo shows and the queen on everyone’s lips in London (but don’t worry, there’s a cream for that).

Drag Queens Vs. Zombies first premiered at the Takeover Festival 2019 at York Theatre Royal to a packed audience in the main house, followed by a goulish run at the Pleasance, Islington for the London Horror Festival 2021, and a 5 night run at the King’s Head Theatre as part of the Springboard Festival in April 2022.

Interested in having the a-frock-calypse coming to your venue? Email us at info@hausofdench.co.uk for more info!